Ever since I started learning Rust my intention has been to use it for writing games. In many ways it seems like the obvious choice but the restrictions around lifetimes and ownership can make it hard to apply usual game programming patterns. Rust is sufficiently different from all the other languages to require a different its own way to think about problems.

To learn more about how best to use Rust for game development I decided to write a Windows version of an Android game I had made a couple of years ago in Java. Doing a
rewrite meant that all my efforts were focussed on the programming problems rather than game design issues.

I wanted to make sure that this is a 'proper' game in the sense that it deals with all the ancillary issues such as saving progress, adjusting settings etc. and is built in a way that in a way that could be used as a starting point for other, more complex games. I also wanted to avoid, as much as possible, using Cell or RefCell which can be really useful but can sometimes chip away at some of the advantages of Rust.

There are a lot of game development libraries for Rust that provide a one stop solution for sound, graphics, UI, controls, etc. I think these can be great, especially in the early stages of development. My own preference is to assemble a set of set of smaller, more targeted crates. Rust's dependency management makes this particularly easy to do.

Most Rust game development libraries push some kind of Entity-Component solution. I don't think there is anything wrong with them but I wanted to to 'discover' the need for one rather than assuming that I needed to use one. ( Also, having spent a lot of time debugging Guice on Java I have become weary of code that automagically wire up things behind the scenes )

The downside with assembling your own set of crates is that sometimes they do not play nicely together and it can be tricky to find out why. I spent ages tracking down a problem caused by winit making drag and drop support the default which did not play well with cpal because they had incompatible Windows Thread Apartment models.

The crates I ended up using are;

Rust's ownership model puts strict limits on the what kind of architecture's are allowed. The biggest language restriction is that there can only be one mutable reference to a piece of data. Many design choices revolve around how to manage those mutable references. My experience is that the restrictions force you to think much harder about the design but this ultimately results in much cleaner designs.

Below is the very high level design that I ended up with; 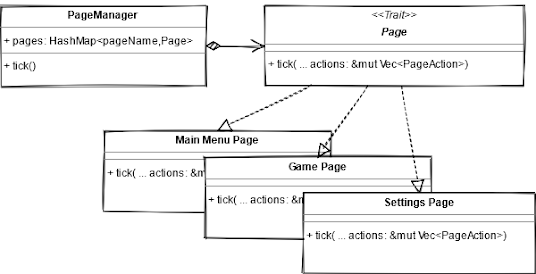 When the game first starts up it first loads all the assets and then transfers the ownership to the PageManager.

This design works quite well and makes the ownership of any data very clear. There is a danger that PageManager could evolve into a god object as the project becomes more complex. I could foresee a situation where the number of PageActions could become hard to manage and tedious to maintain.

I don't think the design ended up being that different from the Java version. The main difference is that it is much cleaner in Rust, mainly because the ownership rules make it harder to break your own design rules. There were times where it would have been short-term convenient for multiple pages to control the same mutable object but would have introduced longer term code debt (In many ways Rust makes it harder to create code debt)

I had three ways to address this;

Controlling all the different visual transitions can quickly turn the code into an unreadable mess. For example; when you enter a game page, it needs to control fading in, fly text in and out, drop the movable pieces and disable/enable the input.

Before using Rust I would typically end up with tons of little variables that would either be used only during a particular sequence or have variables whose meaning depended on the current state. Both made it very hard to reason about the code and had a tendency to introduce some very tricky bugs.

Rusts enums let me store the current state and the data relating to that state in the same enum. This stops polluting the code with state dependent variables. Combined with the match functionality and its requirement for completeness enums are very incredibly powerful. The more I used them, to more uses I find for them.

It takes a little bit time to appreciate this. Initially all Rust code is a bit overwhelming because there are so many new concepts and the syntax is unfamiliar. Once I got used to the syntax I found that it was actually faster to read and understand Rust code. Because Rust is so strict about object ownership it is easier to build a mental model about how the code works. (This is not entirely true for code that has complex lifetime annotations which I still struggle with)

This project has been my pet project for some time with very infrequent opportunities to spend time on it. Usually when I don't spend time on pet project for a couple of weeks I find it tricky to get back into it. With this project I found it easier because Rust makes the state of any code more binary; if the code compiles I can be fairly confident that there are no unresolved design issues.

Rust changes the way you think. Working with other languages after spending time with Rust feels like entering a wild west where anything goes.

Not having well defined ownership or rules on mutability feels irresponsible.

You can get the source code for the project on github. My original original Android game is here.

Ever since I started learning Rust my intention has been to use it for writing games. In many ways it seems like the obvious choice but th...